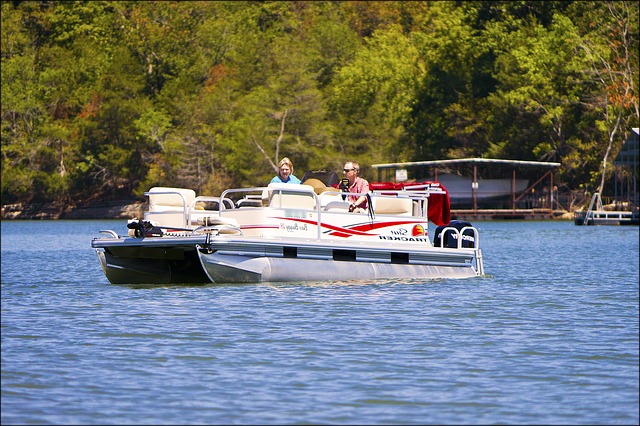 “Welcome back everyone to another exciting edition of PIMP YOUR PONTOON!” the flamboyant rapper host bellowed into the camera lens.

Sean swallowed hard. He rarely enjoyed the spotlight, and this was his first time appearing on television. His heart beat so fast he could feel it in his fingertips. He watched the host yell a bit more about how great the episode had been so far, and how much greater it was going to be before the credits rolled.

“Now, Sean,” the host said, grabbing Sean by the shoulder and pulling him close. “Tell us all about the personal upgrades you did to this sailing beauty and tell us how long it took you to complete them.”

“Well,” Sean said, clearing his throat as the cologne from the host irritated his nasal passageways and throat. “Do you mean before you guys did your thing?”

The host roared with laughter, slapping Sean on the back so hard he winced and gritted his teeth.

“Do you mean before you guys did your thing, this guy asks! What a riot he is! Of course, Sean, what else would I mean?”

Sean cleared his throat again, balling up a fist in front of his mouth out of habit. He swallowed hard again and wondered how many people would watch the show when it aired and whether or not they would notice how nervous he was.

“Well, after I graduated from school I had an old laptop I didn’t use. So, I secured it to the deck with super glue, and I also hooked up a boombox to the laptop to play music whenever I wanted. I changed some of the light bulbs as well so that I could set the mood.”

“Set the mood?” the host said, a toothy grin spreading across his lips as he continued. “Perhaps you were planning to harpoon some pontoon poon?” He obnoxiously winked a few times and slapped Sean on the back again.

Sean coughed. “No, well, I really just didn’t know what mood would need to be set so I figured I would be prepared.”

“Well there you have it, folks,” the host said, pushing Sean back a little so that he stumbled as the host leaned in closer to the camera. “Jake, show them what this bamma’s boat looked like before we took over.”

Since this was the initial taping of the show, nothing actually popped up anywhere. The host paused and let the microphone dangle at his side. Though his features dropped a little, he kept the grin on his face as he counted down the time the producers had told him to wait. Sean looked on, growing increasingly self-conscious about the wetness spreading around his armpits. He started to wonder if he would perspire through his clothes. He made a mental note to keep his arms down.

“Can you say ghetto?” the host continued, laughing at the end of his sentence. “When Sean’s mother approached us and said she feared for her son’s life, we thought she was kidding, but this thing was a floating disaster waiting to happen.”

Sean swallowed again, his face flushed red from embarrassment as the host tore him to shreds. If he had the smallest amount of hope for a harpooning session at some point, the chance was sinking like a ten-pound weight.

“But we put some real pizzazz into this pontoon. I think out of all the pimped out pontoons we’ve created over the course of this season, this one is by far the best.”

The host turned back to Sean and grabbed him by the shoulder. He squeezed and pulled Sean closer as if they were the best of friends.

“Sean, are you ready to see your ride?”

Sean nodded, too afraid to say anything else. The host said his signature phrase into the camera, and they headed for the dock. It had been at their backs the whole time, but the closer they moved to the water the more the wind whipped around them. Lake Michigan rippled from the constant wind, and all the visible boats rocked a bit against their tethers. A large curtain had been constructed around Sean’s boat, and the surrounding pier had been cleared for the filming. The large curtain was bright red and rippled in the wind as well.

“Jake. Show them what we’ve done!”

The curtain dropped from the top and splashed into the water, revealing Sean’s boat. He was genuinely shocked that they had splashed a new coat of paint on his boat. It was white and blue before, but now it was coated in hot pink and lime green candy paint.

“Don’t you think that’s a little too bright?”

“Too bright?” the host said. “My man, as bland as this thing was before, now you’re at a normal shade.” The host laughed and turned back to the camera. “We’re going to check out all the tech our boys put into this thing right after these messages.”

The host turned to Sean after the camera indicated they had paused for a commercial break. “Come on, man. Don’t ask dumb questions like that.”

The host shook his head, and Sean started to get angry. He stewed for a bit but soon caught up to the camera crew as they moved down to the boat and boarded it. They all fit comfortably aboard, and Sean was at least happy to see that everything looked nice.

“Welcome back, folks, and are you in for a treat today! Check out the premier things we did to this boat!”

Sean had seen the show enough times to know that they would show a side-by-side comparison of his boat with the newly modified boat. For now, though he just watched as the host went around to the various locations and talked of each.

“Instead of a crappy laptop glued to the deck, we’ve installed a whole entertainment hub! This thing even comes complete with a USB port, a stereo system with so much bass he’ll have the fish dancing, and mood lighting to finally let him harpoon the poon.”

The more the host spoke, the more Sean knew he would die alone and without any friends. He sighed and tried to imagine the show getting canceled, though even if that did happen, he still had to float around on a boat painted as bright as the rising sun.