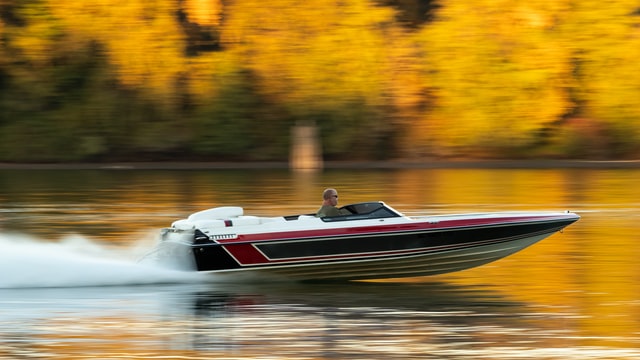 1 – Didn’t Someone Say That Water And Speed Was A Dangerous Mix?

Oh,right. That was us. Well, we weren’t kidding. Our first thoughts revolved around a wonderful picnic/camping trip along the shores of a tranquil lake somewhere where you can rip it up with a few jet boats,some alcohol and a lot of poor judgment. Those are the times that good memories are made of.

However, there happens to be a far more dangerous activity out there than our suggestion. It’s called the Quicksilver Water Speed Challenge. It’s held – where else? – in Australia and is the most dangerous water race on Earth.

2– Our Gas-Powered Reference Above Is Incorrect

Did you catch that before we pointed it out to you? The coolest thing about jet boats is that there are no rotating external parts. That is to say, no propeller is used in order to move the vessel around. Instead, a jet of water sucked up from underneath it is spat out the back.

This is done with a nifty little pump-jet built into the boat. The water gets forced through a nozzle, and that pushes it forward think of it as an alternative to paddling but faster and more efficient. So, there is no gas motor required to spin propeller blades that do not exist.

3 – There Is A Slight Similarity To Regular Boats

Alright, this is a bit of a reach, but there are two very different types of jet engines used on jet boats. There’s your inboard, and then there’s your outboard. You see where we were going with the mention of similarity of sorts?

Okay, now that we’ve mentioned that the most interesting fact about either of these jet systems is that the jet itself will consume 30-percent of the engine horsepower in the process of sucking up water, sending it through the jet system and spitting it out the back of your vessel. That’s 30-percent, folks!

4 – Blame It On Them Being Down Under

Although the modern one got its beginnings from New Zealand, the Jetboat Association of Australia is probably the best-known of the governing bodies of the watercraft. It was formed in 1971 and boasts members from all over the globe.

It is pretty much the one group you will want to be able to say you hold membership in because it is that impressive a club to join. Oh, and by the way, in recent years the JAA has actually been affiliated with the JNZ group. That’s JetBoating New Zealand in case you didn’t recognize the letters.

There is something about the military that really takes things up a notch or two in regards to consumer products. In the jet boat industry, in particular, the military happen to have the biggest jet-driven watercraft on the planet. In case there’s some skirmish in the high seas, we suppose.

However, the high-speed passenger ferry industry has also embraced this technology and has some massive examples of their own floating around. The German made 120-meter long Valour Class frigate is the largest of them all as far as we know today.

Believe it or not, this speeding watercraft has some very practical history behind it. The water jet was first developed in 1954 by Bill Hamilton. Hamilton, officially identified as Sir William, was an engineer based in New Zealand.

His goal was to create a vessel that could be easy to maneuver through the maze of fast and shallow rivers in his homeland. Say what you will about those wacky Kiwis living Down Under, but thanks to Sir William, his creation has traveled the world and has become the jet boat we all know and love today.

The jet boat was apparently first conceptualized in Queenstown, New Zealand. In fact, to gently remind all the Aussies one continent over of this fact, the Kiwis playfully – and possibly intentionally – refer to Queenstown as the jet boat capital of the world. It’s also the location of the first-ever endurance race which runs for several days and was launched in 1970.

To add insult to injury, New Zealand somehow managed to pioneer pretty much anything related to, and those pesky Aussies like to try to steal their thunder. We doubt it has anything to do with jet boats, it’s obviously personal from our perspective.

8 – You Could Try To Break A World Record

Speaking of going big or going home, the world’s “Fastest Man On Water” is an Aussie (don’t get us started…). Ken Warby set the record with a speed of 317.60mph/511.11km/h on October 8, 1978. Records were meant to be broken, so there’s a challenge for you. Just so you know, Warby set the mark with his “Spirit of Australia” in Blowering Dam NSW.

Apparently, he has been working on building a new vessel in an attempt at breaking his own record. You may just beat him to the punch if you get on it fast enough. Remember, we did say that speed and water could present some form of danger. But world records are a different matter.

9 – There Are No Rivers On Mt. Everest

It was back in 1977 when Sir Edmund Hillary led the first-ever jetboat expedition. It was titled, “Ocean to the Sky” and it started at the mouth of the Ganges River. We can only speculate on the results of that wonderfully wacky sounding trip.

Hillary, in case you didn’t know, became the first man to reach the summit of Mt. Everest back in 1953. What you may not know about the man is that he also hails from New Zealand. Do you see a bit of a pattern developing here at all? Regardless, Hillary saw jetboats as an opportunity to get his name in the papers once more.

10 – Jetboats Contributed To Hydroelectricity, Sort Of

It was back in 1924 when Bill Hamilton – the inventor of the technology that led to the creation – set up a workshop for the building of these vessels. The workshop was named Irishman Creek Station, but it held a unique, cutting-edge secret.

The workshop had a dedicated turbine that produced electricity for both the workshop and outbuildings, including a house. It was considered one of the first such examples of hydroelectric power being used for well, created electricity. It paved the way for many additional applications.

Still, Want To Play With This Crazy Thing Called A Jetboat?

Anytime you can mix water and speed together in a recreational activity. You’ve got our attention. That’s because we see that combo as the perfect recipe for fun, excitement and possible disaster. It really does boil down to how you use the mixture.

Just for fun, let’s throw caution to the wind and see what exactly there is to know about gas-powered aluminum hulls and maximum speed that gets our adrenaline pumping. Pumping into overdrive.

It’s a different way to travel on the surface of a lake or across a babbling brook. Sometimes you have to bite the bullet and take a chance. With a jetboat, you at least have a fighting chance of not capsizing as you take that leap of faith. Provided you aren’t trying to jump waterfalls, that is. So batten down the hatches and get comfy. This may not be pretty, but it will be factual. Nothing can compare to the rush you get with a motor under your seat.

On the other hand, the fact that the jetboat can maneuver shallow rivers, especially those that are fast-moving, makes this a great tool for travel and for the fisherman who really wants to get away from everyone and spend time with nature.

So there you have it. We have spelled out for you many interesting facts about jetboating ranging from history to endurance and most everything in-between. Would we want to own one? You bet! Aside from the speed aspect, we find the fact that this versatile vessel can move through shallow bodies of water far more attractive than our aluminum fishing boat decked out with an electric outboard motor.

Plus, we should be able to get into places that other boat can’t. For fishing, nature is watching or just for fun, they are our top pick for playing on the water.